The 28th of September marked the first sports encounter for 2019 – The LC/BC Hockey encounter. As always our girls prepared with immense enthusiasm in order to put up a great fight. The team captained by Nishara Karunatilake emerged runners up with a thrilling draw in the junior match and the senior match ending with a score of 2-0 in favour of the Bishop’s College. 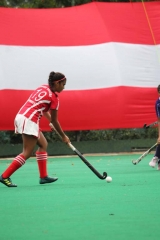 This year was unlike any other for our valiant water polo players who trained harder than ever before to reap extraordinary results. Excitement hit its peak on the 11th of October at the Sugathadasa Stadium as LC-ites of all ages decked in red and white filled the stadium.
The junior match ended in a heartbreaking 15-6 score line in favour of the Visakhians. Our senior team captained by Rheanna David emerged victorious in a fast paced game culminating in a nail biting finish with a score  of 13-12.