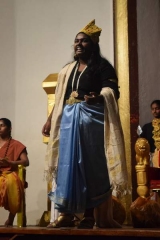 Kim is a mean, tough, teenage gang leader of a group of girls who bully kids in their school. Kim’s sidekicks, Frankie and Ruby introduce Ellie to the gang. Kim allows Ellie to join the gang once she earns her place by bullying Jake into giving her his mobile phone.

First a teacher and then some school security guards try to cheer Jake up. Then Jake tells his friends Ant and some basketball players what had happened. They all wish they were strong and brave like superheroes.

It is Friday night and the story moves to Ellie’s house. Her parents are going out and leave Ellie in the charge of her older sister Rachel. Ellie settles down to finish her homework when Rachel bullies Ellie and orders her off to bed.

The next morning Ellie and Ruby victimize Jake by having another go at bullying him by stealing his money. A miserable Jake wishes he could change things. Then Jake meets his friend Danny (whom he doesn’t know is Kim’s younger brother). Jake tells Danny he wants to run away and Danny says he’ll show him a great place to hide.

It is Saturday night and all the teenagers are enjoying “hanging out” in their favourite pool bar in town, when Ruby, Ellie, Frankie and some gang members come to the pool bar. Jake’s friends confront them asking for Jake’s phone to be returned only to be told to get lost. Kim comes in soon after looking worried because her brother Danny has gone missing. The gang offer to help her to look for him.

The story shifts back to Danny and Jake who are on the way to Danny’s great hiding place, a warehouse. The boys realize that they will be in trouble already by this time, so they decide to stay overnight in the warehouse. No sooner they settle down to sleep they are alarmed when they hear voices in the warehouse. Some of the security guards from school come into the warehouse to look for costumes for a parade they hope to attend on Sunday. Though it is late in the night Kim’s gang continue their search for Danny.

Early next day Danny goes outside to buy food, and meets his sister Kim and some of her gang. She is delighted to find him. He explains that his friend has been bullied, and that’s why they ran away. Jake comes out of the warehouse and Danny is horrified to discover his own sister is the leader of the gang that bullied his friend.

Danny is ashamed of Kim, but Jake persuades him to give her another chance, as the gang explained that they all became bullies because they had been bullied themselves. Ellie gives Jake back his phone, and they decide to confront Ellie’s sister, Rachel, to see what turned her into a bully.

Jake and Ellie confront Rachel backed by some of the gang. Ellie and Rachel reconcile and everyone joins and enjoys the parade in the city.