You are here > Homepage > About > History > Mrs. Eesha Speldewinde 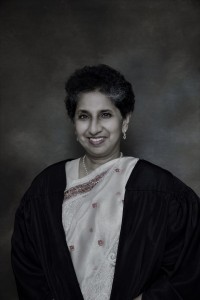 Mrs. Eesha Speldewinde (nee Abeysinghe) a distinguished old girl of Ladies’ College was born in England on the 20th of February 1961. Her mother, Mrs.  Premalatha Nanayakkara, was also an old girl and a former Chemistry teacher in school.

Mrs. Speldewinde was an extremely talented sportswoman who excelled in swimming and was appointed the school’s Swimming Captain. She also participated in English debating, English and Sinhala drama productions and was elected as the Loos House Captain and appointed a school prefect. After leaving school she graduated from the Faculty of Law, University of Colombo with a Bachelor of Law (LL. B) degree.

Mrs. Speldewinde returned to serve her alma mater as head of the Centenary Secretariat during Dr. Miththapala’s tenure and organized the annual prize giving and provided her expertise in sports.  She also served as the Secretary of the OGA.

Having been appointed as the Vice-Principal of the school in 2008, which she says was “totally unexpected”, she served in the said role for 6 years giving her time unstintingly. She was thereafter appointed as the Principal of Ladies’ College in January 2014, exactly 100 years after Miss Nixon had relinquished her duties as the founder Principal.

During her tenure as Principal Ladies’ College the school continued to progress in a varied number of fields including the digitalization of teaching in the school. In 2017 the school’s E-data system, Akura, was introduced which not only helped in computerizing school reports but created a useful SMS communication system with parents and provided a platform to upload schoolwork during the closure of schools after the Easter bomb attacks in 2019. During this time Mrs. Speldewinde worked tirelessly with the country’s top security personnel to ensure the safety of students and staff and introduced a CCTV camera system to cover the school’s periphery and main areas within the school.

Under Mrs. Speldewinde’s leadership and with the invaluable support of the OGA, Ladies’ College became the first national school to introduce smartboards in every classroom in 2017 which enhanced the learning experience of students. The determined effort on her part ensuring that all teachers young and old were trained by experts in the field paid dividends when this trained and tech-savvy staff was able to expeditiously and smoothly transition into online teaching when the Covid19 pandemic engulfed the country in 2020. Using the MS Teams platform, apart from online lessons, activities of all clubs and societies, sports training, assemblies, parent days, prayers, special celebrations etc. were interactively and actively virtually carried out.

Mrs. Speldewinde’s deep concern for the comfort of her staff and students enabled her to achieve the successful completion of yet another cherished project: a series of additions and extensions to existing buildings were undertaken from 2015 and completed in 2017.  From the state-of-the-art boardroom to the renovated senior staffroom, prefect’s room, Tamil medium Art room, Tamil medium class rooms, and tea room etc. provided comfortable spaces and facilities to students and staff. The much needed support staff quarters, for which her utmost priority was given, was completed in 2019. Extensive refurbishment was also carried out in key spaces of the school such as the main office, reception, Principal’s office, Accounts Department, Facilities Section and both the Primary and British Advanced level staffrooms. Additionally, a new Magazine Room and refurbishment of the Learning Support Unit and the Counselor’s Room in the Coppleston block was done. A space in the Kindergarten building was renovated to include a KG staff room and both the Nursery and Kindergarten play areas were fitted with safe and modern play equipment. Furthermore, Mrs. Speldewinde spearheaded the laying out of lawns in the KG, Simon Block and front gardens to ‘Bawa’ precision. Facilities were enhanced with the installation of a generator to cover the whole school and upgrading of the basketball court and the Sports Complex.

Mrs. Speldewinde understood the necessity and importance of strengthening the operational systems in school and accordingly established the Human Resource Department, streamlined salaries, continued to secure pension facilities for the teachers and introduced a point scheme for the election of Prefects and the Head girl.

Throughout Mrs. Speldewinde’s tenure a high standard in academic, sports and extra-curricular activities was maintained, often reiterating that “we have to reinvent our teaching/coaching to keep in line with the 21st century”. The school curriculum was enhanced with the introduction of the BTEC programs in both Hospitality and Business and Mass Communication as an additional subject in both the Local and British AL sections. Student achievement milestones during her tenure include a student being placed 2nd in the island at the G.C.E. Ordinary Level exams and 5th in the island at the G.C.E. Advanced Level exams, the school Netball Team creating history by winning the All Island Games, winning the Shakespeare Drama competition and the Senior and Intermediate choirs winning gold medals in the Asia Pacific Choir Games.

Acknowledging the value of inculcating an appreciation of the fine arts and aesthetics in the development of a child, and in line with the ethos of the school, Mrs. Speldewinde actively encouraged outstanding drama productions in all three languages. King and I (Middle School), Bully (Primary School), Prince of Egypt (Senior School) and Under the Sea (Primary & Middle Schools) in English, Lavinia, a Sinhala drama and Ravana Rajiam, a dance drama in Tamil were some of the performances orchestrated during her tenure of leadership. The “Route 66” LC walk was organized in 2018 to raise funds for a Performing Arts complex.