The Fernery on Flower Road purchased 1910 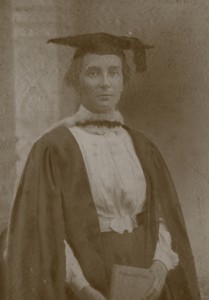 At Ladies’ College Cheltenham, Lilian Nixon came under the influence of its famous Principal Dorothea Beale who brought to the realm of women’s education a vision and determination that had transformed it. Ms. Nixon became a highly qualified woman both a graduate from Trinity College Dublin and trained teacher, which were assets in her plans for the future as a missionary to further women’s education.

Her intellectual strengths, impeccable qualifications and abilities were so impressive, that as a young woman of 26, she was selected by the Church Missionary Society to be the principal of a school for girls in a far flung colony of the British Empire – Ceylon.

In 1899 the Lilian Nixon and Elizabeth Whiteney arrived in Ceylon to establish a school for girls. She founded the school for girls in 1900 in a rented bungalow in Union Place, Slave Island. Though the initial furniture, rent and salaries of the missionaries were funded by the C.M.S. the school was to be self-supporting from the start.

Ladies’ College and all that it stands for is proof of the faith and courage with which Ms. Nixon coped with these obstacles. With quiet determination she set to perform an almost impossible task, surmounting these difficulties with donations on personal request from well-wishers abroad, Despite starting off with just two students, with great vision and expectations for this school, she named it C.M.S. Ladies’ College Colombo after her own school. The motto and crest (St. Patrick’s shield of faith) she designed for the school was evidence of that faith.

Despite the early years of doubt and uncertainty the school grew slowly but steadily. A Kindergarten – one of the first in Asia – was a part of the school from the earliest times. The children were therefore of different ages and in different stages of progress and the first teacher, Ms. Loos was employed. Soon after the school was founded, she started a training class for her teachers. So distinctive was the nature of training given, that teachers from other schools soon began to attend these classes and the certificates granted at the end of the training course were recognized by the Government. Due to her flexibility and adaptability, the numbers grew. She extended the curriculum to Cambridge Local Examinations and admitted boys as well as girls. By 1910 she had two hundred students with a separate boys’ department of 50 students in Darley Road. The premises were now inadequate and this meant that the school needed to move.

In 1909 she established an Old Girls Association (OGA) – one of the first in the country. This proved to be a loyal group of old girls who helped her considerably in finding funds for the development of the school. They published a newsletter “The Leaflet” which also functioned as the school magazine. Despite her financial difficulties, in 1910, she took the bold decision to purchase the premises “The Fernery” on Flower Road with a loan from Trinity College. The house was both unsuitable and inadequate for a school, but with hope and determination she set to work, and with the help of donations from Rev. C.L. Burrows, the “old” school hall was built, thus providing six class rooms separated by folding doors. Part of this was used for Assembly each morning. A Hall for drill was donated by Mrs. Heywood, a friend in England. Mrs. Charles Peiris donated a class room for boys, but it came to be called the Cambridge Room as it was occupied by the fifth and sixth formers who were sitting the Senior Cambridge.

She resigned in 1914 due to ill health and a difference in opinion with the C.M.S. regarding becoming a “Grant In Aid” school. In the space of 14 years, however, she had laid the foundation on which Ladies’ College was able to prosper and flourish. She left behind her a school which not only boasted of high educational standards, but a school which was open to any girls who wished to study, irrespective of their ethnic or religious background.
Ms. Elizabeth Whitney, who had been appointed Principal of Chundikuli in 1909, returned to Ladies’ College in 1914 as Acting Principal till Ms. Opie took office as Principal in 1917. [Excerpts from Ladies’ College a centennial narrative 1900-2000 and History of C.M.S. Ladies’ College (1957)]