Boxford building and garden purchased in 1934

You are here > Homepage > About > History > Gwen Opie 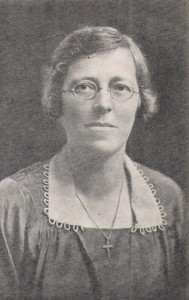 The period 1917 – 44 for Ladies’ College was marked with the stewardship of yet another great Principal, Ms. Gwen Opie.
It was a period of enormous expansion in terms of physical space and academic and extra-curricular activities. Ms. Opie’s hardest task and major contribution lay in the manner in which she successfully guided the school through changes involved in becoming a “Grant-in-Aid” school, both conforming to the regulations of the Department of Education and helping to influence its policies.

In keeping with the tradition of involvement in the larger community which had been the founding principle of the school, Ms. Opie played an increasingly important role, serving on numerous committees in an age of governance by committees. Ladies’ College was fully established as a “Grant-in-Aid” school. It was fast earning a reputation for its high quality, resulting in increasing numbers of pupils. State grants meant that the enormous financial burdens Lilian Nixon had faced were somewhat eased.

Ms. Opie decided to construct new buildings and expand the premises, many of the projects being funded by donations from Ceylon and New Zealand. “If Lillian Nixon had the vision to acquire what had been then an idyllic tree-filled property called ‘The Fernery’, Ms Opie had the acumen and practical ability to turn it into what can today be termed one of the most beautiful school premises in the country”.

In 1919, the Kindergarten with dormitories for the boarders on the upper floor was built and in 1921, the annex and domestic science room were added. In 1923, the Copelston Block was built to accommodate class rooms with the upper floor for boarders. Further extensions of a library, an art room, and quarters for the principal were added at a later date. The neighboring premises, “Hanover House”, was purchased in 1928 and used as class rooms till it was demolished to give way to the building of the Chapel of the Hope of the World which was funded entirely by gifts.
The Boxford building was purchased in 1934. In 1939 Gaster House was built in the garden of Boxford to accommodate boarders and release the other buildings for classrooms.

In 1925, the school uniform was introduced with its distinctive square neck line designed by Ms. Tatham. At the same time, she encouraged extra-curricular activities which included sports (two tennis courts and two netball courts) and a House system. The Parent – Teacher Association was formed in 1932. The formation of the Tamil Manavar Sangam (1932) and the Bhashika Sangamaya (1934) gave a new impetus to oriental drama, music, dancing and literature; both Tamil and Sinhalese. Guiding was also introduced.

In 1942, the school which was occupied by the army was re-sited in Bishops College and the hostellers were sent to Kandy. The disruptions and the tensions of the time and travelling to Kandy to supervise the “other half” of the school took its toll on Ms. Opie’s health. She died of heart failure in January 1944 and was buried in the Kanatta Cemetery.
Ms. Rita Opie, the Vice Principal at the time, was appointed Acting Principal till Ms Simon took office as Principal in 1946. [Excerpts from Ladies’ College a centennial narrative 1900-2000 and History of C.M.S. Ladies’ College (1957)]