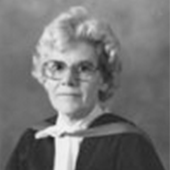 It is with deep sorrow that we announce the passing away of our
beloved Former Principal Ms. Olive Hitchcock on 24th December 2018.

Ms. Hitchcock joined the staff of Ladies’ College in 1946 as a teacher and Ms. Simon’s trusted and able advisor.
“She was first appointed acting Principal in 1964 on the retirement of Ms. Simon and then appointed Principal in 1966. On taking up the acting Principalship in 1966, her sensitivity to the changes taking place in the wider society are reflected in the unobtrusive manner in which she introduced a greater degree of cultural openness. It was a subtle shift away from the colonial ethos. . Ms. Hitchcock’s period as Principal is often seen as a period of transition – a space between – but filled so competently and effectively as to be noticed only as continuity not a space.”